Sniper Builds focus on taking out targets from very far away, ideally in 1 shot, before anyone even knows they are there. While this sounds easy in practice, it is much more difficult to play this way when facing multiple enemies, because you cannot fire very rapidly. In this Guide we’ll take a look out how to overcome this issue, how to make a Sniper Build that deals incredibly high damage, and how to play it to perfection. If you’ve been wanting to Snipe the un-living daylights out of your enemies, then read on for some helpful information. 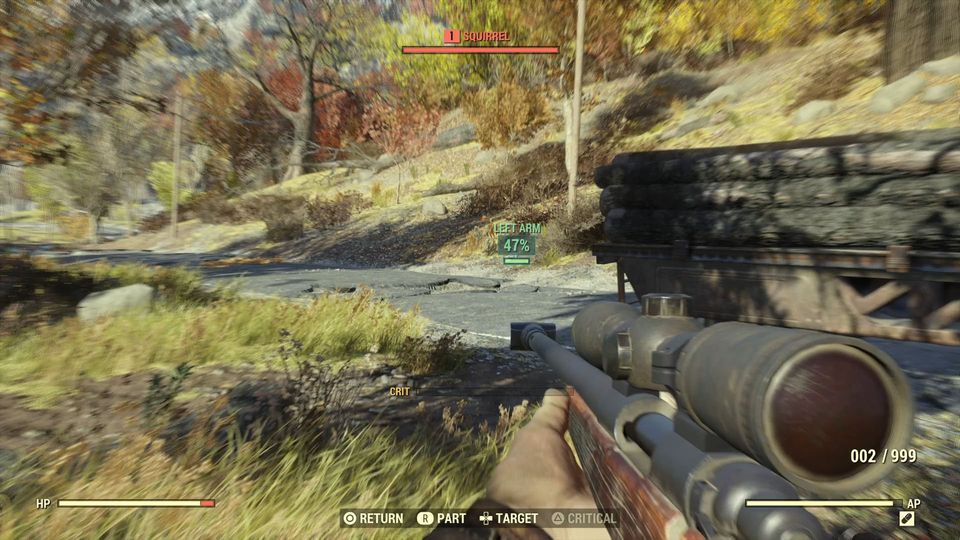 When first starting out in Fallout 76, you’ll be doing most of your Sniping “manually”. That is to say that you will have to aim your weapon yourself, target the body part you wish to shoot yourself, and hopefully connect with your shot. In order to shoot from a long distance you will need some sort of scoped Non-Automatic Rifle. Ideally one that deals the most damage per shot, but also one that you can find ammo for easily. Hunting Rifles are probably the most common, or you can use a Pipe Rifle instead. If you can’t find one that has a Scope then you will need to Modify it at a Workbench and add one (once you have the materials). Once you have your Rifle you’re all set to begin your Sniping ways.

The first thing you’ll notice when looking down the scope is that it has a sway to it, and it isn’t as easy to aim as you’d think. Luckily you can “hold your breath” by clicking the Left Stick on your controller, so that you stop “swaying” for a short time. While holding your breath you will consume Action Points at a steady rate, so you will not be able to keep this up indefinitely. This is one of the reason Agility will come in handy, to allow you to do this for longer bursts of time. Note that squatting down does not decrease the sway of the Weapon you are using, so there is no need to do it.

Next you will need to determine where on the target you wish to shoot for maximum damage/results. While often this is the head in many cases, sometimes it isn’t always as obvious, particularly with monsters and mutants that don’t seem to have one. In addition, many times you cannot kill the target you are facing in one shot, and crippling a leg or an arm may actually make the fight easier. This is because enemies move slower with Crippled legs, and sometimes cannot wield weapons or attack with Crippled arms. Knowing where to shoot on which enemy type will come with experience, but you can always use the Fallout 76 Wiki to look over enemy weaknesses. When in doubt, shoot for the head.

The last thing you need to know is that Range serves two functions when it comes to Weapons. First, it determines the damage you deal with said Weapon over a given distance. The higher the Range the Weapon has, the more damage it can do from further away. As you start to get outside a Weapon’s Range, you will notice it does less and less damage until it’s nearly non-existent. Second, it determines the Weapon’s chance to hit from further away when used in V.A.T.S., which brings us to our next section.

Use manual aim in the early going as a Sniper Build until you can get your V.A.T.S. hit chance up high enough to use it with more regularity. This will take quite some time, so don’t expect to be using V.A.T.S. much before you hit level 20 or higher. The idea is that you manually aim until you get Legendary Weapon Effects that make V.A.T.S. a more rewarding proposition, and then you begin taking Luck Perks that further benefit this style of play.

Because you need to hit enemies repeatedly in V.A.T.S. in order to fill your Critical Meter, you will not get many Critical Hits until later in the game. When you do have a Critical Hit, save it for a tough enemy, and make it count. Using it from Stealth will boost its damage even further, so try to use them before that tough enemy even knows you are there. 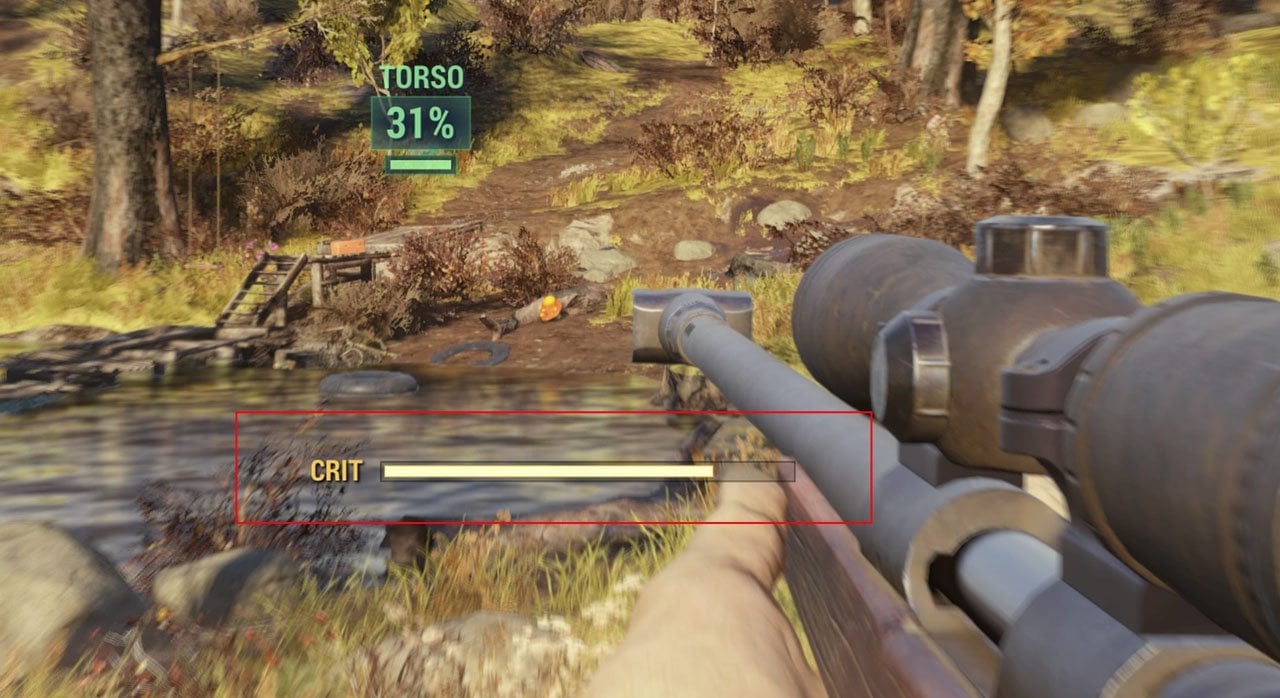 Because the Legendary Effects Concussive, Stalker’s and Two Shot are so important to a Sniper Build, you may have to use Legendary Weapons that deal less damage than others. The randomness of the Weapon drops may force this upon you, and you’ll have to decide what is more important to you: more damage while not being able to hit anything in V.A.T.S., or more consistent shots in V.A.T.S. leading to more Critical Hits. Your Sniper Build may ebb and flow a bit with the gear you acquire, and that is ok.

While it’s always a good practice to aim to kill every enemy in one shot, sometimes you you’ll be in scenarios where the Rifle you are using is “overkill”, and you might want something that fires a bit faster. Weapons like the Black Powder Rifle have extremely long reload times, and you might not need that much damage to deal with a group of weaker enemies. For this reason, I highly recommend carrying several different Rifles so that you can use the best one for the scenario you are in. And remember to use V.A.T.S. when you are in tight quarters and you can’t Snipe! 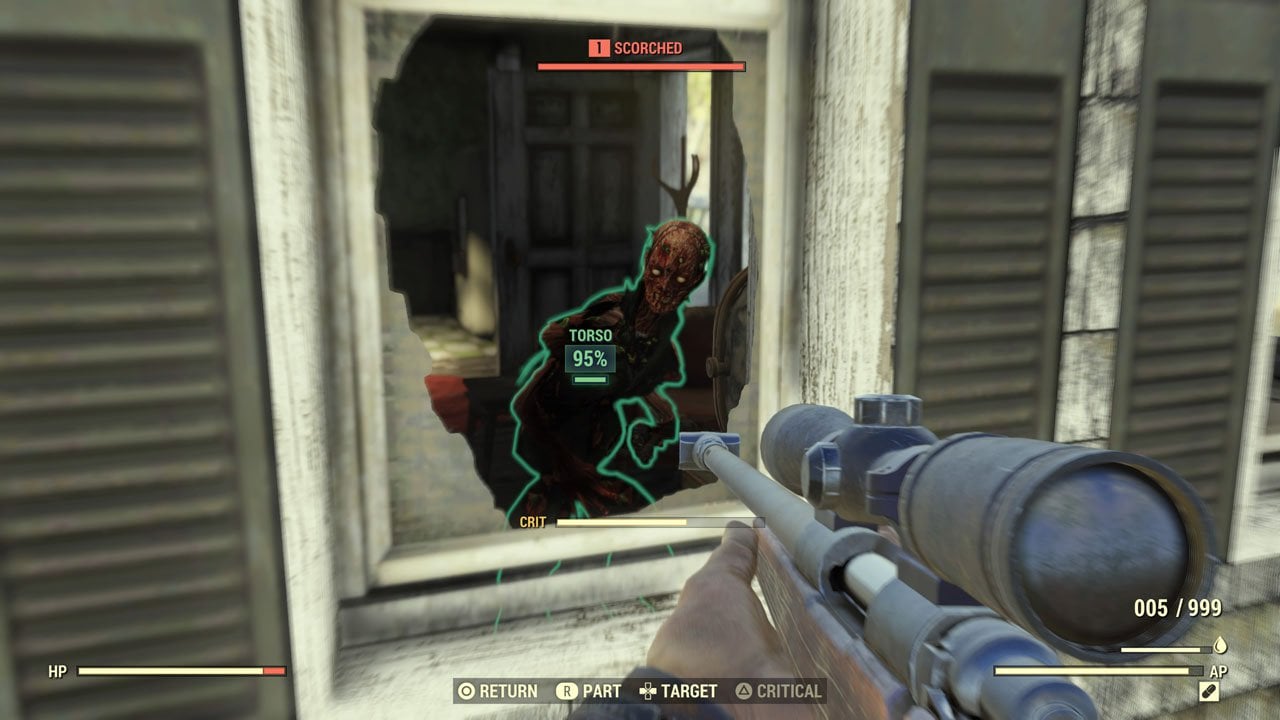 Lastly, this Build works much better in a group than it does alone. This is because once you have the attention of a group of enemies, they are going to focus on you, and that makes Sniping hard to do. Ideally you’d be in a group where your teammates are drawing the fire and melee attacks of enemies, where you are somewhere safe Sniping away. However, if you do decide to go it alone, be sure to get the Lone Wanderer Perk for an easier time.