Which will go over the various details and highlights of this special location within the wondrous landscape of the wasteland. You can find this spot to the left top of the map, it is located to the north of Vault 76 where you start the game.

This is one of the more dense areas, it may not be large but it is certainly full of cool things to see. There’s also a quest here to find a lost stuffed critter, that is highlighted towards the end.

That’s all of the aspects that make up the Tyler County Fairgrounds, you can read more about the game below and view the hub for further coverage. If you spot anything else neat we missed, be sure to let us know. 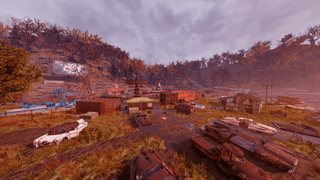 The Tyler County Fairgrounds is a large carnival type area with a sprawling assortment of rides and fairgrounds games and boasts several attractions, many of which are left intact and ignored by the Scorched that roam the grounds.

On the northwest side you can find a large parking lot in front of the fairgrounds, with a metal shed or greenhouse off to the left, which appears to have been the site of a birthday party or Halloween festivity The place is full of assorted party favors and stuffed animals, and there’s a Tinker’s Workbench in the far corner.

Heading into the fairgrounds from the west side, you can find a baseball throwing station with both baseballs and bowling ball targets, and across from it is a locker station with a chem cooler.

Next to the locker room is a golf ball toss game with dozens of mason jars in the middle of the stand. A large nuka cola stand nearby holds several nuka colas and a first aid container.

Off to the south are a few smaller employee buildings with containers inside, next to a row of games including basketball free throws, Ski Ball and the Wac-a-Commie game, where you can pick up Commie Whacker melee weapons. Past the games is an eating area with food to grab, and just outside is a row of portable toilets and a Medical Vending Machine.

On the wall of the games building, behind the fortune teller, you can find a missing poster for “Freddy” Wood, last seen at Wavy Willard’s Water Park, and will give you a miscellaneous quest to find the robot Miss Annie at the water park location in the Toxic Valley.
On the west side of the park is a large slide area, next to a kitchen station which contains a Cooking Stove, and possibly a recipe nearby. 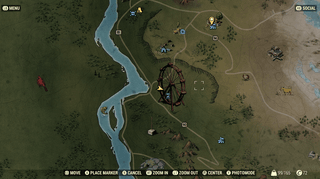 Due to the nature of the fairgrounds, there’s a lot of toys that can be found at this location, including plenty of different types of Teddy Bears and Mr. Fuzzies.

The Halloween party shed contains several Jack-o-lanterns, including ones with the Vault Tec logo, Vault Boy, and even the Mysterious Stranger icon.