As the troll engages you, you’ll find that this enemy is tougher than the Draugr you’ve gone up against thus far. This troll has a health bar so big it’s comprised of two sets, and it will take a lot of punishment to bring him down.

Note that when he attacks his slab glows orange – this means his hits are so big you won’t be able to block them so don’t even try it. 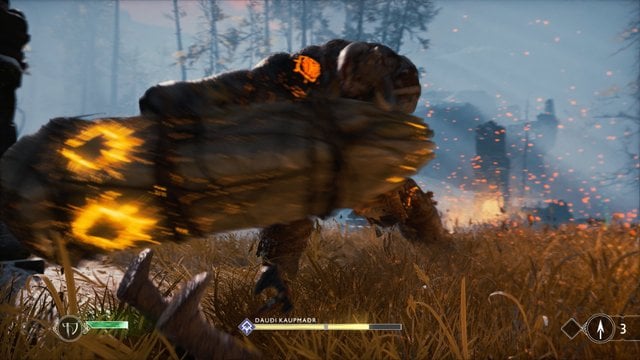 Instead, focus on dodge-rolling to the sides and following up with a few slices before retreating. You can use Atreus to distract him by triggering him to fire arrows, and then attack when the troll’s back is turned – Atreus is nimble enough to dodge the attacks so don’t worry about him.

The troll’s attacks are usually a one-two punch: A low swinging thrust, followed by an overhead slam. Learn to read the movement of these two attacks and wait for the slam to start attacking with quick slices or a few heavy attacks, then back off and start tossing your axe or having Atreus shoot. If you stay close for too long the troll will knock you backwards, making it harder to dodge the upcoming attacks. 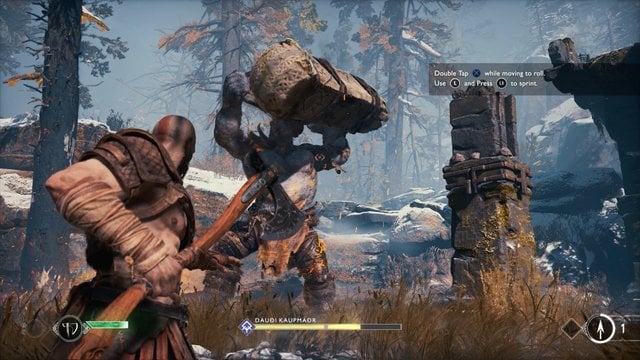 After taking quite a few hits, the troll will start changing up his attacks, and incorporate a wild swinging chain that thankfully doesn’t have a huge range, allowing you to backup and alternate axe throws and bow shots. At the end of his swings you’ll see him slam his weapon down and start panting – that’s your cue to sprint over (press in on the left stick) and start attacking until he regains his stamina. If you start getting low on health, lure him into breaking down stone blocks and you might find some health inside. 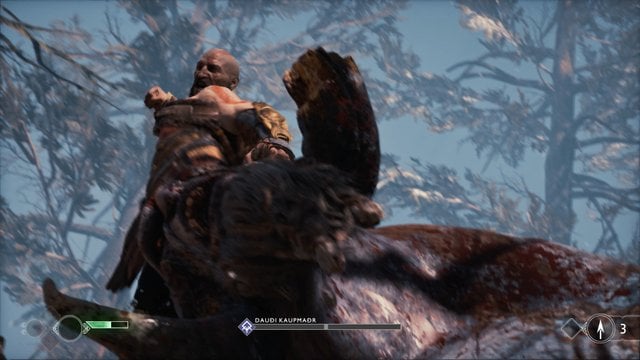 Keep fighting cautiously and don’t get too greedy with hits or too slow with your dodging. Don’t be afraid to let Atreus take some of the heat while you prepare your next string of attacks. Once the troll’s health is depleted, press in on the right stick when prompted to finish the monster off for good.

Next is up: Return to the House Walkthrough