Atreus will start leading you down a path to the North as he searches for deer. You can now control Kratos better, and explore the yard around the home if you want – however, you won’t be able to engage in combat just yet. 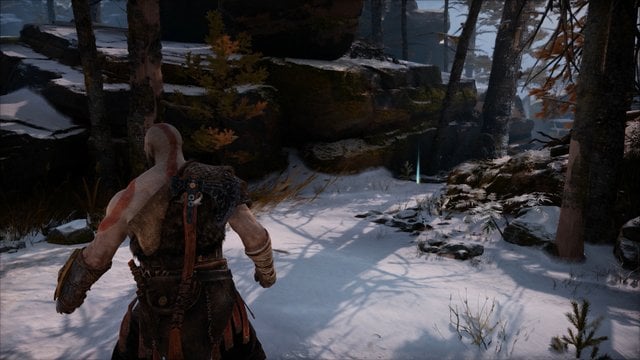 Following Atreus up the path as he looks for tracks into a wider area. Atreus will move to the left – but if you go right you can find a different set of tracks in the mud to point out to the boy. As you move back to the left, Atreus will head up some stone steps further into the wilds. 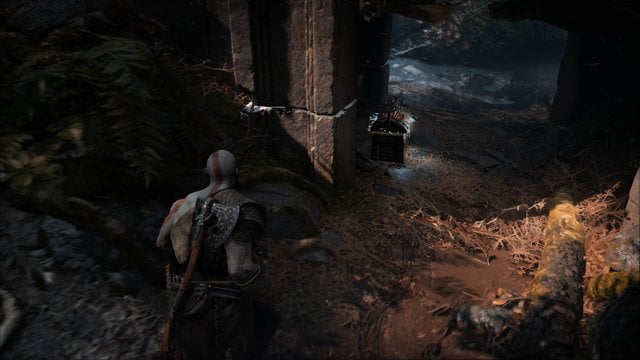 You can also check under the bridge to find a Hacksilver Chest – a commodity you can use to upgrade items later. 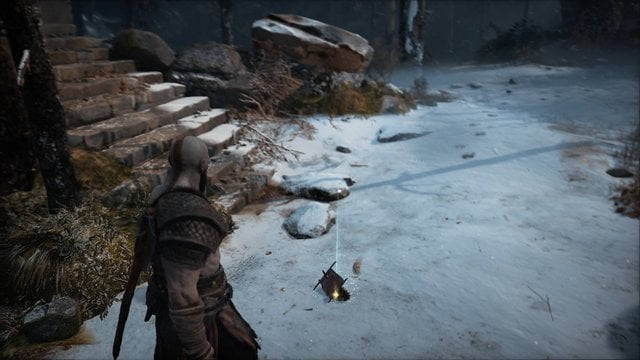 Heading up from the stairs you’ll come to a gap you must jump to cross. After Atreus joins you, he’ll spot more tracks and take off running. Eventually he’ll find the deer, and it will bolt off further North and to the left. 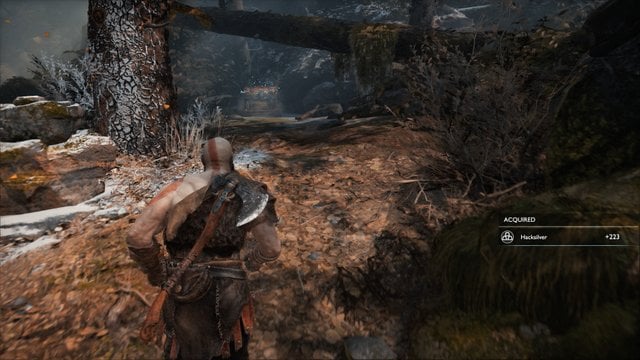 Before tracking the beast, be sure to look right where it first appeared find some Hacksilver on the ground, and a larger Hacksilver Chest at the end of the path on the right.

As Atreus leads you to a bridge, you can spot some Hacksilver by a cliff to the right – and a chain just out of reach. Ignore it for now, and continue across the bridge until you find the other end blocked. 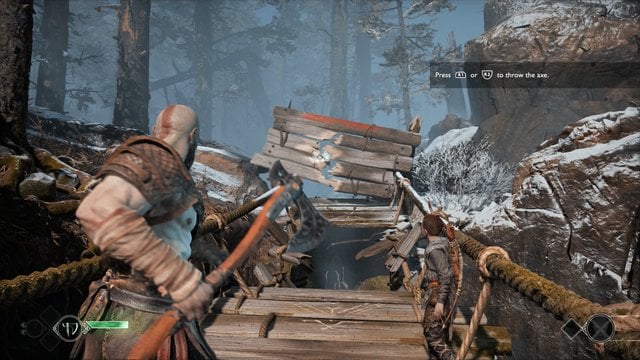 Use the prompts to hold out your axe and aim at the blockade and throw it to break the wooden barrier. After throwing it, you can return it to your hand at any time by pressing triangle – remember this well.

On the other side of the bridge, keep moving up until you spot the deer again. After it runs off, Look right and you’ll see Atreus get ambushed by Draugr – now it’s finally time to fight. 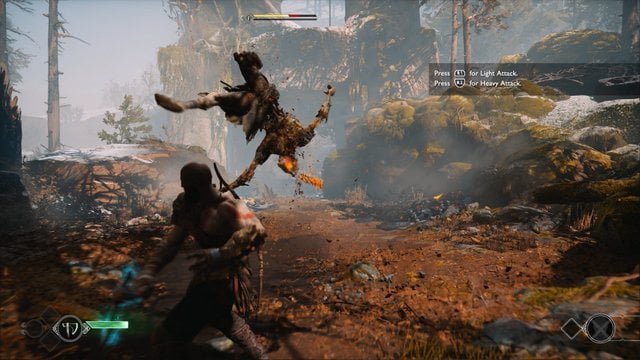 With your Leviathan Axe, you can change between light and heavy attacks as you lock on to your target – battles may seems slower and more methodical in comparison to Kratos’ past adventures, but you can still unleash a flurry of blows. A well-timed heavy attack can also launch an enemy in the air, allowing you to keep striking with light attacks before they can hit the ground.

As more enemies appear, you’ll find that you have an retractable shield you can use to block incoming attacks, and you can also throw your axe at enemies, and continue the fight with shield and fist. Try out combos by slicing apart enemies, throwing your axe at another target, pummeling them, and sending your axe flying back into your hand.

Once you’ve eliminated all the threats, you can continue on to hunt the deer. Before heading deeper, turn around back where Atreus tried to shoot the deer to find a low log you can leap over. You’ll find a body here with some Hacksilver you can grab. 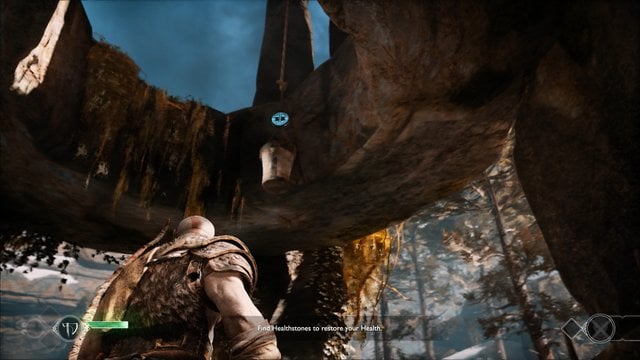 Entering the ruins, grab the green Healthstone to replenish any health you lost. You can also look up to spot a giant bucket with a glowing icon above it that you can throw your axe at to send it crashing down for some Hacksilver. Atreus will track the stag to the left, but you can go right to drop down to the right to find a side path. 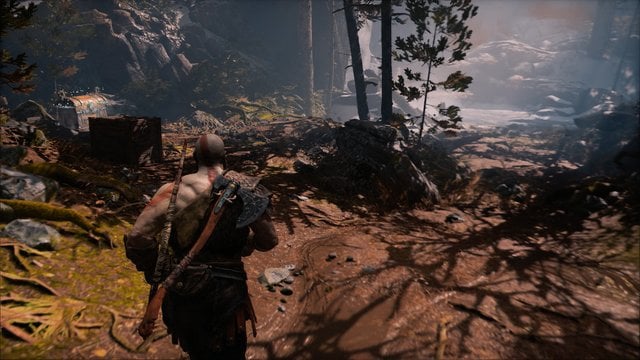 On the left of this path will be a Hacksilver Chest, and if you keep moving to the stream, you can find a corpse near the waterfall on the right with more Hacksilver, and a view below points to more treasures to find.

If you look to the left of the waterfall you can spot that chain you saw earlier. Head back upstream to the first waterfall and look for a ledge to climb to the side leading to a campfire with some Hacksilver. 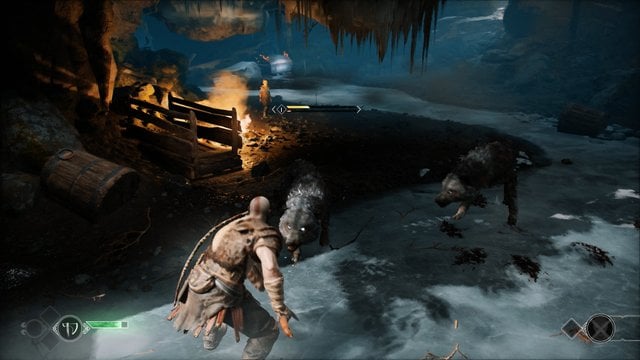 Go right and you’ll find the base of the chain that you can climb down to the stream. Down here, two Rabid Wolves will attack you – they move fast, be ready to dodge or block and then follow up with a few swipes, and don’t get too eager to attack or let one get behind you.

Once you’ve dealt with them, look to the right to find a massive Coffin that holds a lot of Hacksilver. 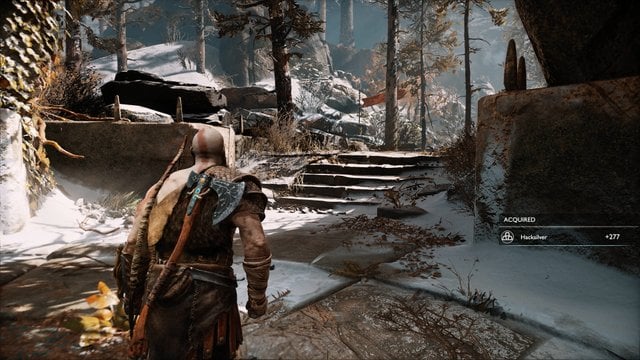 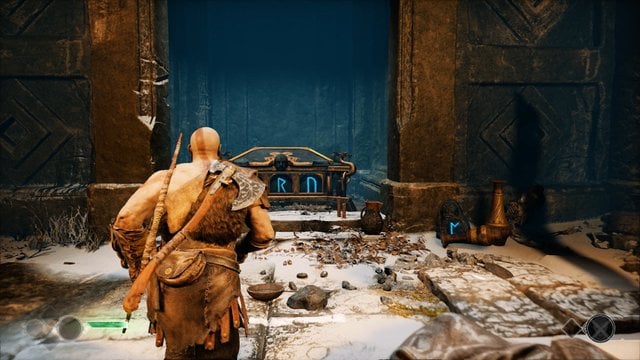 Returning the the hunt, follow Atreus as he tracks the stag across a bridge towards a foreboding temple. Ignore the chests and loot on the ice below, you’ll get to them soon enough.

Once you enter through the temple gates, you’ll again spy the stag off in the distance, but you’ll need to get closer. Follow Atreus over a gap and down the stairs to the lower area of the temple. 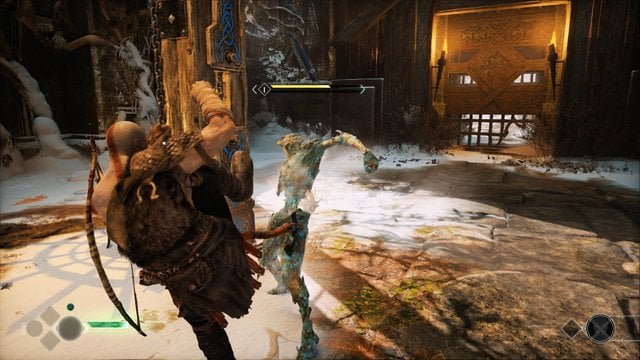 Down in the open area, more Draugr will attack you near the far gate. Start the fight with a well placed axe throw and leap over to start punching before yanking your axe back. Test out your dodging and blocking skills – and remember that pulling out your shield at the last moment can stun an enemy and leave them vulnerable to follow up.

Once this group has been defeated, you’ll have to find a way through – but first, about that treasure you saw earlier: turn around and head through the unlocked door at the opposite end of the open room to head out onto the ice.

Out here you can spot the large chest and other loot, but more Rabid Wolves guard it. Be ready to dodge or block when they prepare to lunge to get an advantage over them, and keep to quick strikes so one of them doesn’t interrupt you with their bite attacks. 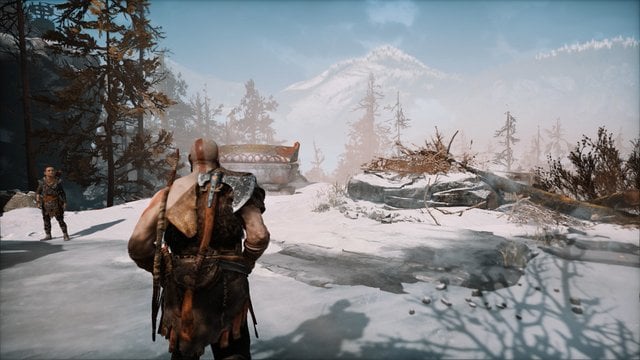 As they fall, more will appear, as will Draugr, keep fighting until no more show up, and you can help yourself to the Hacksilver on the ground, as well as a Coffin full of Hacksilver. 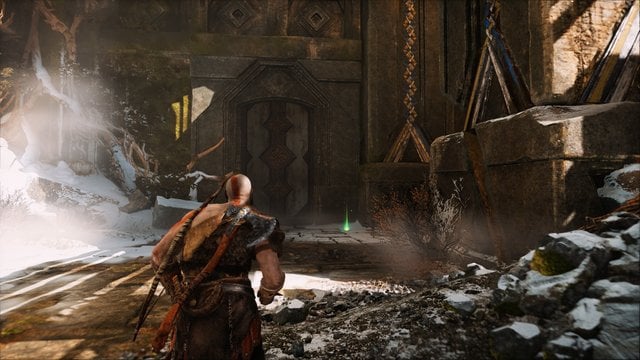 Back inside the temple, look for a chain one one of the two posts in the middle of the room. 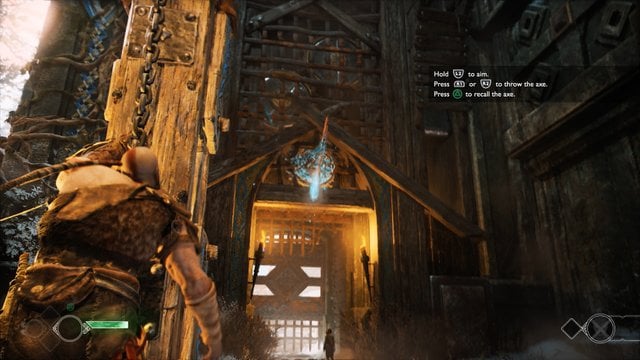 Grabbing it will raise one of the two gates in front of you, and the one to the right. Since letting go will lower the gate, you need to make it stick. Look up above the door to spot a glowing icon (as well as a bucket of Hacksilver) and hit them both to freeze the gate (while still holding the chain) in place. 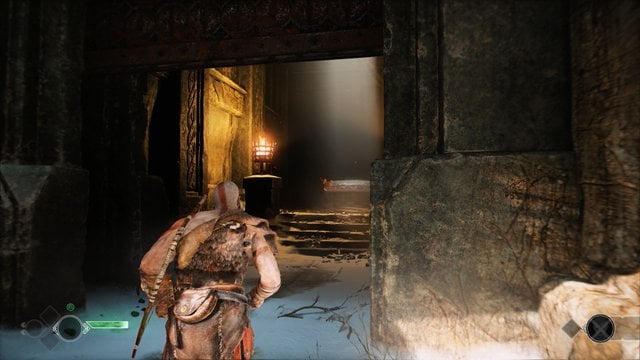 Now you can enter the room on the right to open the Coffin full of Hacksilver, then cross under the first raised gate, and then return the Leviathan Axe to your side to lower the gate behind you and raise the outer gate. 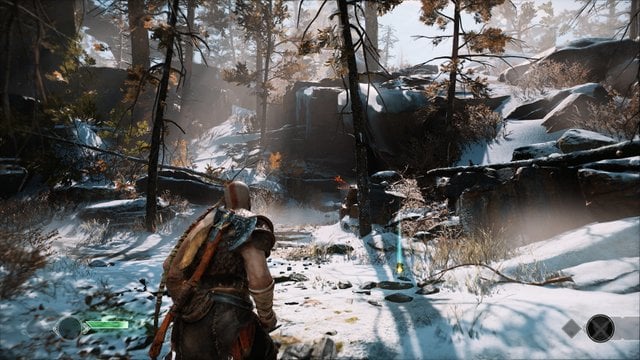 Outside the temple, Atreus will head right, but you can go left to find another large Coffin full of Hacksilver. 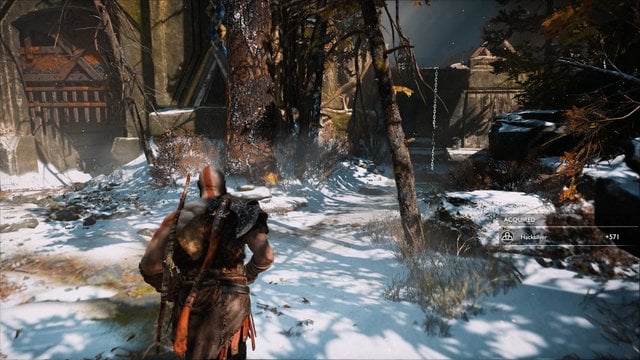 Turn around, and look for an alcove near the temple gate to find a chain leading back into the temple.

Notice the red urn here next to some black rock. If you destroy it (preferably at a distance) it will explode with fire and detonate the nearby rock – and light you in fire if you get too close 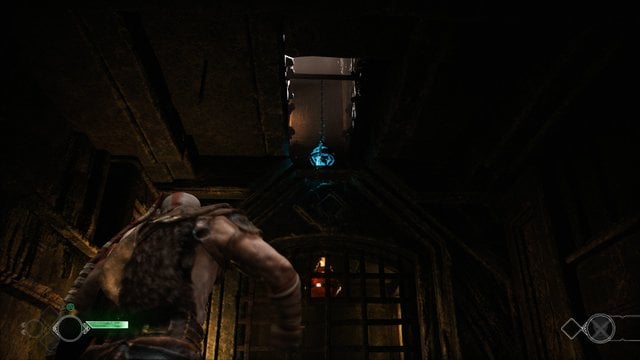 Further up is a gate blocked by rock, but you can spot a red urn on a chain on the other side. Stand back until you can see the opening to the other side, and knock down the bucket of Hacksilver and then hit the chain’s target to send the urn crashing down, unblocking the gate so you can reach a Hacksilver Chest. 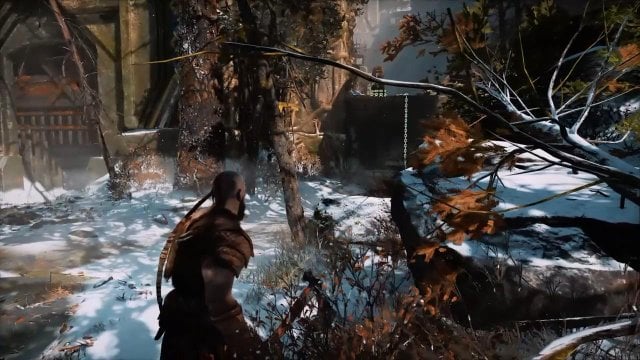 Return to the temple exterior and follow the path upwards to a small bank overlooking the stag below. 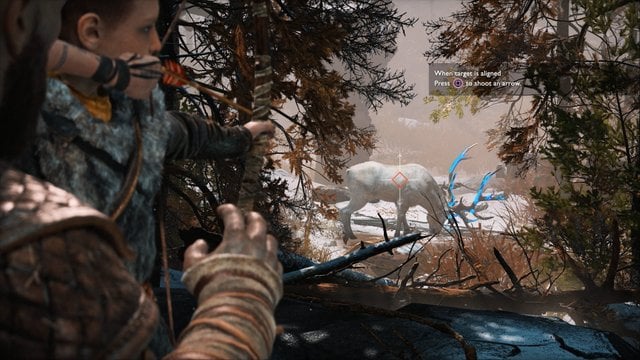 Kratos will try and guide Atreus to strike the beast – hold in L2 and move the right stick to center over the stag. When the time is right, press square to loose the arrow when the reticle turns red. When the beast falls, follow Atreus over to see him finish the job.

Next is up: Defeat Daudi Kaupmadr Walkthrough