It’s time to get a little grub in your gut. Get in the car with the rest of your buddies and get rolling. Follow the yellow marker to the Cluckin’ Bell drive-thru in Willowfield (Notice the tag on the side of the building? You’ll want to come back for that). After a cut scene, you’ll notice a rival gang’s car nearby. You’ll have to chase it down and stop it cold, before the fools inside can cap your homies. 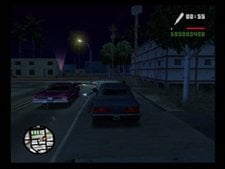 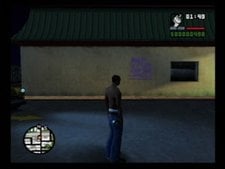 Follow the car as it weaves through the streets, and make sure you don’t get out in front of it. Ideally, you want to roll right next to it so your guys can spray shots into the car as you move down the street. Be careful on corners that you aren’t going too fast and overshoot your mark. Be patient and take it slow, and soon you will force the Ballas out of their car. When you do, get out and equip your bat, and go to town killing those who are left. If possible, grab one of the weapons they drop to finish the job. Or, get in the car and run them over.

When they all die, you’ll be prompted to get back into the car (if you aren’t already). Do it and haul ass back to Sweet’s house. Be careful, though… you might be dogged by other gang cars. If you take too much damage, your ride will catch fire and explode, and the mission will fail. Once you deliver the other homies to Sweet’s house, you’ll need to take Smoke to his. Finishing the mission will yield respect and $200.

[su_note note_color=”#64656b” text_color=”#fbfbfb”]Right around this time, if you’ve been following the missions, you will get a cell call from Sweet, who tells you about the gym. This will be represented by a red dumbbell on the map. Cruise over there and go inside. Use the weight machines here to build up muscle and work toward your “gangsta physique.” Select a machine and follow the onscreen directions to build your mass. Most of the equipment requires you to tap between alternating buttons. It’s a good idea to put your controller flat and use index fingers to do this quickly. After several exercises, you will be unable to grow your muscles for the day.[/su_note]

Next is up: Nines and Aks