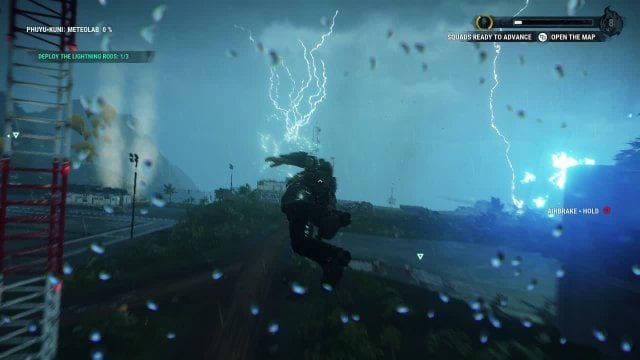 Once you land after finishing “Meteolab Grab,” assuming you didn’t just jam Rico into the ground like a yard dart, you can dispatch forces to seize Phuyu-Kuni. Conveniently, that also puts you not even half a kilometer away from the starting point for “Obtaining the Ion Coil.”

If you run in here directly after finishing the region strike, the Meteolab probably still has a few Black Hand holdouts causing a ruckus. That serves as a potential complication to what’s otherwise a tutorial mission: if Rico is the highest object in an area, that means Rico is subject to a potentially fatal lightning strike. If you’re currently glowing with static electricity, that’s your cue to start moving as fast as you can before you get zapped.

It won’t kill him outright from full health, because Rico is basically Mexican Wolverine, but if you’re already damaged and it knocks you out of the air, that could be enough to finish you off. It also means that if the Black Hand has fielded any aerial units in an area that’s being hit with a thunderstorm, whatever you’re doing is likely to be interrupted at unpredictable intervals by being showered with bits of burning helicopter.

Wait. Right. This is a Just Cause

Bits of burning helicopter that you didn’t personally blow up.

Go raise the three lightning rods, as directed, before returning to raise the ion coil. Fortunately, despite the mission’s teasing, all you have to do is use the same console a second time to re-raise the lightning rods and wrap this up. Your reward is an entertaining cutscene featuring Tom Sheldon. 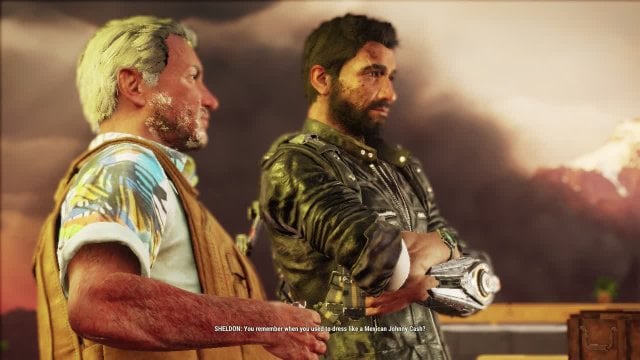