Murderous Pursuits what is the goal of the game

A guide on how to identify your targets and your killers, plus hints on staying undetected.
Table of Contents

What tools are at your disposal?

This tracker shows you the direction of your target and how close you are to them. If you’re close and have a direct line of sight then it’s a full green bar and the Quarry tracker device says “Quarry is near”.

Hunter Indicator
This indicator is situated below the quarry tracker and shows you if your hunter is close enough to you that they receive the “Quarry is near” message in their Quarry tracker device.

Another important indicator is the exposure gauge: If it’s 5 you’re clear and get the most out of the next kill. If it’s 1, go to the next hiding spot. If it’s red with a wide opened eye your quarry sees a symbol above you, indicating that you’re their hunter and your hunter will see a quarry symbol above your head to show them that you’re the target. Both will see this through walls and floors.

The last tool for finding out your quarry and your hunter is the reveal ability. It has a cooldown of (sorry have to find this out when the game is live again) and a reach of (guess what, yeah have to wait for that as well, sorry). It reveals once activated the roles of the surrounding characters. The possible indicators above their head could be a grey symbol for irrelevant people, they may be NPCs or players who’re neither your hunter nor your target.

There’s also the red hunter symbol you already may have seen above exposed hunters. Finally there’s also the green quarry indicator that could be hanging over some poor fellows head like the sword of damocles. Just keep in mind that those indicators will be shown for a few seconds (I’ll find it out I promise) and vanish afterwards. This means that you have to react quickly if you found your relevant people. 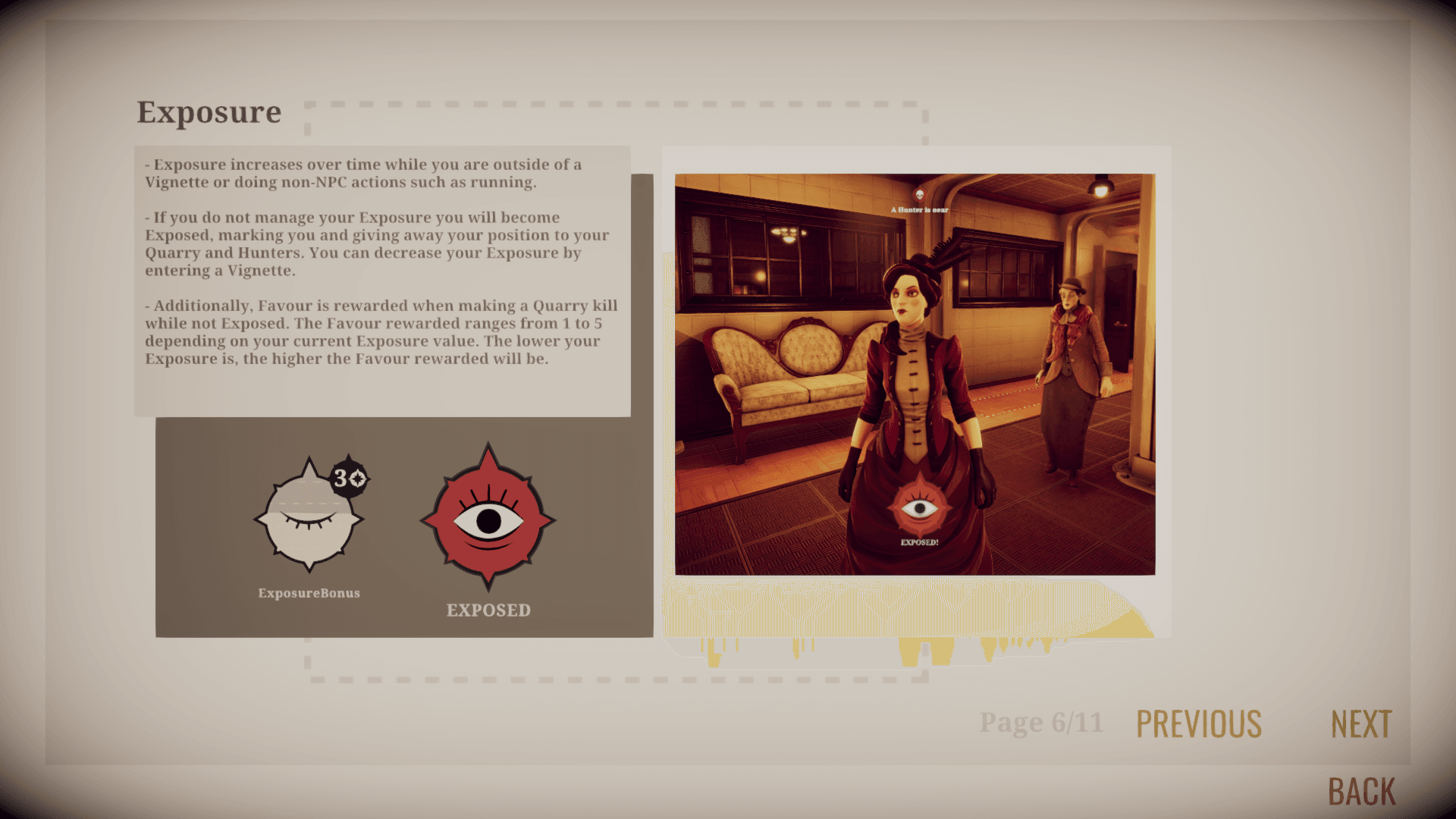 Best way to use the Murderous Pursuits Tools

If you’re finding your way through our Murderous Pursuits guide and still wondering how to use your tools most efficiently you’ve come to the right place!

When you are using your Murderous Pursuits Quarry Tracker Trool, whenever there’s a green bar it will get wider the closer you are to your quarry and if you get really close with direct line of sight it will become a full bar and as we mentioned earlier, “Quarry is near” appears. If you ever think you see your target, you can quickly test this by breaking your line of sight with the enemy and if the “Quarry is near” message goes away then you’ve found them.

Now try to approach them like you’re an NPC on your way to the next social gathering so they get surprised and not run away. This specifically means that you shouldn’t sprint, grab a weapon or do anything else, just walk slowly and in a straight line just like a NPC would (so the Quarry doesn’t suspect you’re a real player).

In case you see the hunter indicator light up (from gray to white) then I’m afraid your hunter is near and you need to take extra precautions. The best thing to do is to check who entered your room and who is near, if it’s just one person then obviously it’s your hunter. If more people are in the room, break line of sight with each of them one by one in order to test who the hunter is (you’ll also see the white indicator go back to gray).

If you have a bunch of people walking towards you and you don’t want to attack the wrong one then use your passive stun stance and hope that they attack in the next couple of seconds.
In case you are alone with a character in a specific room or a hallway then it doesn’t matter if your exposure bonus is 5 or 1 because you don’t have a choice, either you kill them or they kill you.

Your hunter can also attack them, and if he does they lose you as a quarry and get stunned. Whenever you are afraid a hunter is onto you, run in a direction where you wont be too close to anyone, ideally head for a busy room and switch your disguise (this is an ability) if you can. You can then pay attention to who’s following you in order to see who the hunter is.