In order to complete the Legendary Fish quest ‘Fisher of Fish’, you’ll need to lure and catch all 13 specimens. However, you’ll also need to mail every one to Mr Gill in order to properly check them off. You can do this at any Post Office.

There are a total of 13 Legendary Fish in Red Dead Redemption 2, each one representing the pinnacle of its species. Each one is unique and one-off, so once you’ve caught each one, it will no longer be available (much like the Legendary Animals).

How to unlock fishing and how to get a fishing pole?

In Chapter 2 of the main story, you’ll eventually unlock a quest line with John Marston called “Pouring Forth Oil”. After the third quest in the series, another icon will appear on your map in camp where you have to speak to Abigail. She’ll ask you to take the young kid around camp, Jack, out fishing. After this quest, you’ll be able to fish.

Where to find every Legendary Fish?

There are 14 Legendary Fish to dredge from the deep in Red Dead Redemption 2, and you can find them at any time, but to help you along there’s a side-quest that unlocks a full Legendary Fish map.

On the northeastern bank of Flat Iron Lake – after you’ve unlocked fishing by teaching Jack Marston – you’ll meet Jeremy Gill, a collector, who’ll give you the “A Fisher of Fish” quest, along with the map you need.

He offers to pay you for whoppers he can send off to fans of his books as souvenirs, and who can say no to easy money?

For reference, the map he gives you looks like this, with a little picture of the fish over where it can be found in the world: 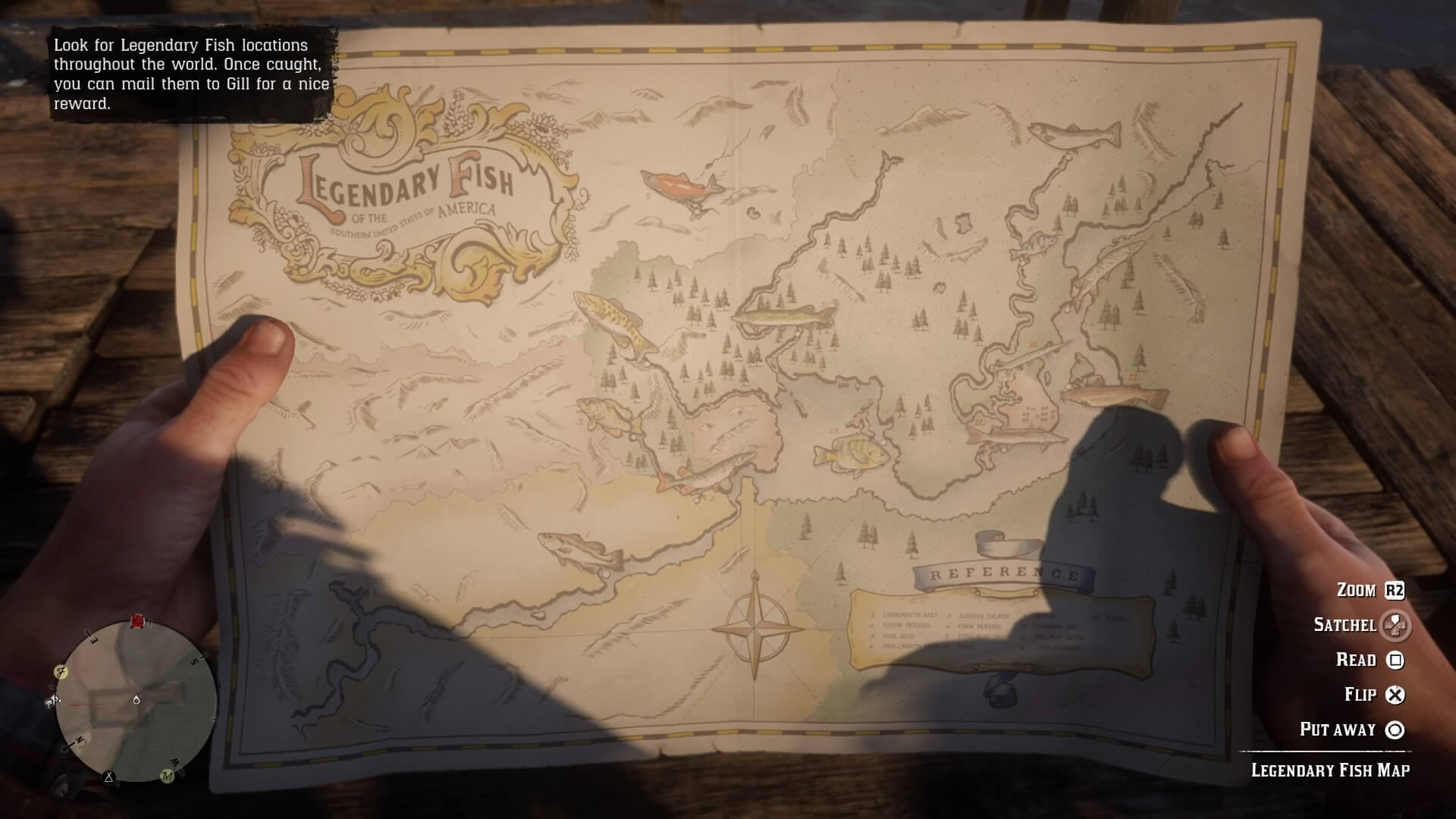 To make your task easier and catch Legendary Fish, the next thing you’ll need is Legendary Lures, which once you’ve met Gill can be bought from fishing shops in large towns for $20 each – so $60 all in.

The three types you get are the Special Lake, Swamp and River Lures, which will be enough for you to snag all 14 Legendary Fish.

Below are the locations – in alphabetical order – of all of them, alongside which type of lure they need:

Legendary Bluegill – Lake Lure : You’ll find the Legendary Bluegill on the eastern bank of Flat Iron Lake, to the southwest of where it says “Rhodes” on the map. You need to go south of the small bay that’s east of the collection of islands in the Lake.

Legendary Catfish : This is the fourteenth fish, which you get a shot at after landing the other thirteen as is its own sidequest.

Legendary Chain Pickerel – River Lure : An easier Legendary fish to find is the Chain Pickerel. It’s just to the southwest of the Horseshoe Overlook campsite, northwest of Flatneck Station, where the Dakota River starts to bend around.

Legendary Large Sturgeon – River Lure : This fish can be found on the southwestern tip of Saint Denis, where the river to the west of the town opens up into a much larger body of water.

Legendary Largemouth Bass – Lake Lure : The Largemouth likes the Lake Lure, despite being in the San Luis River, just to the southeast of Lake Don Julio, which is itself south of Armadillo.

Legendary Longnose Gar – Swamp Lure : You find the Gar around the south bank of Lake Lagras, north of Saint Denis.

Legendary Muskie – River Lure : To the east of Emerald Ranch, you can find the Muskie on the southern side of where Van Horn trading post is printed on the map.

Legendary Perch – Lake Lure : This is another of the easier fish to find. Head to the Elysian Pool, which is northeast of the Emerald Ranch, to land the Perch.

Legendary Redfin Pickerel – Lake Lure : You get this fish from Stillwater Creek, which is the western-most stream that comes out of the Lower Montana River to the west of Thieves Landing and to the East of MacFarlane’s Ranch.

Legendary Rock Bass – Lake Lure : The Rock Bass is in the Aurora Basin, which is a good way west of Blackwater.

Legendary Smallmouth Bass – Lake Lure : This variety of Bass is found to the west of Strawberry, on the eastern bank of Owanjila.

Legendary Sockeye Salmon – Lake Lure : The Sockeye is found in the southern part of Lake Isabella, which is up in the mountains to the northwest of Valentine.

Legendary Steelhead Trout : You find the Steelhead right on the edge of the playable area of the map, up in the northeast corner. The fish is northeast of the Brandywine Drop, which is north of Annesburg, at the top of the river.