So, I noticed some other guides that contain data for the weapons in the game aren’t exactly correct, after a bit of research and in-game testing with a friend I figured out a source that actually has accurate data… The RoE wiki! Later I went ahead and decided to create a chart for all the data.

I’ll most likely be going in-game to find out the rest of the data myself, if it isn’t complete by the time you read this anyway; but if you have any information you’d like to share, you’re free to do so by contacting me directly or leaving a comment. (Proof would be appreciated) 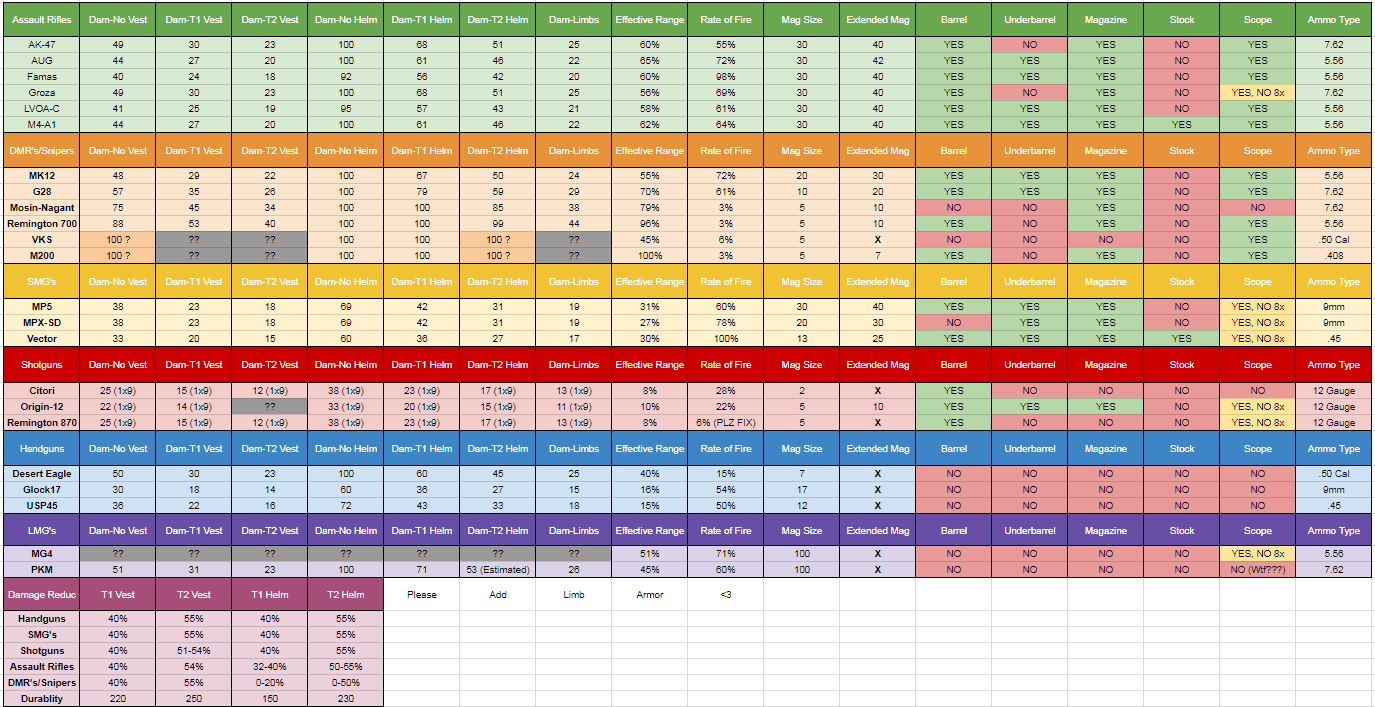 There IS damage drop off, but it’s very, very subtle for most guns (Especially assault rifles), ranging from 1-3 less damage when it exceeds it’s effective range.

No, it does not add nor remove any damage from the gun. I haven’t tested if it effects anything else other than the initial damage, although I’d like to test if it effects the damage drop off at some point.

All upcoming updates will be marked with a number 1-3, 1 being the highest priority and 3 being the lowest; whether or not I get these done, who knows.

As of right now, I’m currently missing damage numbers on a few of the guns, hopefully I can resolve that sometime soon.

Might as well add some reload times into the chart, right? I’ll try testing this later.

I plan on going in-game and testing the exact RoF, right now the chart is using numbers based on the “Bars” you see when you hover over the weapons.

I was thinking of recording and testing the recoil of all the weapons (Not including any slow firing weapons) and turning them into gifs for everyone to see.

Aswell as RoF, I’ll also be attempting to test the moment damage fall off begins for all the weapons, same with the RoF the numbers right now are based on the “Bars” in-game.

Updates to the Chart

– 1/13/2019
Minor update, I accidently swapped out some values in the armor section. Fixed it!

– 1/15/2019
Changed some values with the M200 and VKS, notably removing the extended mag value from the VKS. I’ll be testing out some of the damage numbers in-game sometime this month, especially when the new update comes out. (Thanks Marksman Max)

Also added the upcoming LMGs to the list, aswell as adding the information for the AUG. (We tested it in-game, we’re struggling to find the VKS or M200 now sadly)

Bolded some stuff, because why not?

Currently questioning why the hell you can’t put a sight on the PKM.