Resident Evil 2 remake Tyrant, otherwise known as the colossal Mr. X. This creepy silent giant continually stalks you throughout the game, but who is he? Where did he come from? And can he be stopped?

When do you first encounter Mr. X?
On a first playthrough the Tyrant is initially encountered in the jail cells below the police station, where it kills the journalist being held prisoner there. The first proper encounter with Mr. X, however, takes place after you’ve put out the fire on the crashed helicopter. You’ll approach it and the Tyrant will casually lift the wreckage out of the way, then attack. You can attempt to dodge out of the way and run from it, but it’ll stalk you all over the police station no matter what.

For those that don’t know, check out the picture below to familiarise yourself with Mr. X. There’s not too much in the way of plot that we can reveal about this monster without spoiling the game, so all we will say is that he’s been sent by unknown forces to kill Leon Kennedy and Claire Redfield. 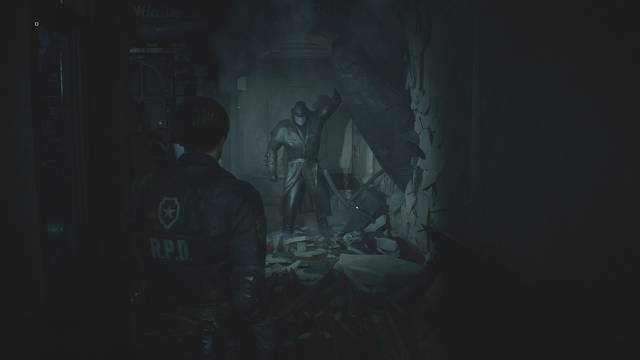 In Resident Evil 2, you won’t encounter Mr. X until you manage to put out the fire in the, uh, ‘fire escape’ area on the map. To reach this area, you firstly need to collect all three medallions in the Raccoon City police department, defeat William Birkin in the underground section of the map, and then take the staircase all the way to the third floor of the police station.

Now head out onto the ‘balcony’ area marked on the map, and you’ll have the option to use the ladder to climb down to the ‘rooftop’ area. Be warned, once you go down here, there’s no turning back, and as we’ll describe further down, Mr. X is going to make your life hell for a long time.

Once you’re on the rooftop, descend down the stairs on your left, and two zombies will burst out of the door ahead of you. Take them out, and use the yellow lever to the left of the door, flicking it to point in the opposite direction. Now retreat to the rooftop area, and use the lever near where the ladder broke, to put out the fire in the wreckage of the helicopter. You can now use the doorway to the left of the wreckage to find a way out of here, and also Mr. X, who wants to rip you in half.

Mr. X is also identified as T-00, and was air-dropped into the Raccoon City police station with two goals: locate the sample of the G-Virus, and eliminate any survivors. The Umbrella Corporation sent the creature there, where it encountered Leon and Claire. This backstory was properly revealed in Resident Evil: Umbrella Chronicles, the light-gun game for the Nintendo Wii. All you need to know is: if you encounter the Tyrant, either shoot it in the head so you can temporarily down it, or run. You cannot defeat it permanently until the end of the game.